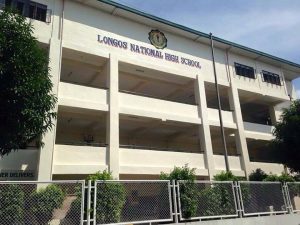 Malabon National High School – Longos Annex is the 7th Secondary School in the City of Malabon, conceived and developed as a brainchild of then Mayor Amado Vicencio out of his dream of “a high school for each barangay”, MNHS – Longos Annex started its construction in 2002 and was inaguarated on May, 2006.

It stands tall in its 3 storey 15 classroom with a rooftop on the fourth floor. Encapulated by the boundaries of Bgy. Tonsuya to the North, Bgy. 14, Zone 2 Caloocan City to the South, Bgy. 8 and 12 Zone 2 Caloocan City to the East, and Bgy. North Bay Boulevard, Navotas. Longos, is now the second biggest barangay of Malabon with a total land area of 196 hectares. Serving a catchment area with a 56,600 population out of 10,500 households in 2003 alone, the population is growing at a rate of 4% per annum.